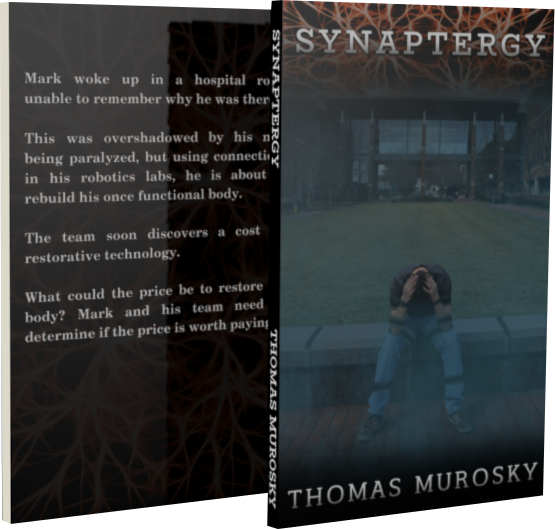 Mark woke up in a hospital room unable to remember why he was there, but this was overshadowed by his being paralyzed! Using his robotics education connections, he rebuilds his once functional body. In the process, the team soon discovers a cost for restorative technology. What could the price be to restore bodily functions? Mark needs to determine if he will pay that price.

The mechanical arm holding the laser emitted a low buzz as the targeting marker was aligned.

“Fire when ready,” John announced. The laser began its focused boring while Mark shifted his eyes across the ceiling. “Twelve” he thought to himself. He tried to speak it, “Twelve lights...twelve lights...twelve,” but he had not been able to say anything since last November.

“Can you feel anything, Mark?”

After a delay, a computer connected to the ACAT speech synthesizer relayed a robotic “NO”.

During brain surgery the patient is kept awake so the doctors can communicate with him during the operation. This laser was busy boring a nearly microscopic hole in the top of Mark’s now bald head to place the implant into the primary motor cortex. The implant itself was a low-power electrical device manufactured with two separate metal alloys designed to pull power directly from his body eliminating the need for batteries or charging. As for the function, that was more complicated. By interconnecting with synapses in the motor cortex, the company promised Mark that he would be able to relay his thoughts into controlling robotic limbs through encrypted short range networks. Though the possibilities were endless, Mark was intrigued by a small shot at somewhat normal life. He wanted to say something without this infernal computer or to pick up a glass of water; maybe his chief concern was using the bathroom without assistance.

“It’s in! How are you feeling now?” John asked.

Again, a pause before the robotic voice disinterestedly mustered, “FINE”.

The operation was complete, and now it was a waiting game for the device to set itself into position and begin the process of interconnecting with his neurons. If the rodent studies were any indication, the process would be complete in about ten hours, and the connections were best made if the subject rested. The twelve lights holding Mark’s attention went dark as he eased off to sleep with the help of the anesthesiologist.

Mark woke up in a haze six months ago to bright lights and the bustling of people. His hazy vision slowly focused allowing him to vaguely recognize people he briefly met at his father’s company get-togethers. In a split-second of panic, he recognized an operating room. He jerked his arm, but no movement happened. He was unable to wiggle a finger, unable to remember what landed him in this state. He knew he screamed, but no noise emanated from his mouth. He was instantly overcome with the most intense panic he ever experienced. Mark wrestled with how to get their attention; how to ask what happened. He was desperate for answers to questions he could not ask. Talking was always taken for granted, but now he was reduced to silence.

The battery of tests concluded that his mind worked perfectly, but his brain lost the connections to his major limbs and his mouth. The former complications meant parental assistance with every task Mark had learned for himself over the last seventeen years. Fortunately, the latter, his communication issues, could be solved with the aid of a computer and some simple training, well, simple for a robotics student. It was crude, but it accomplished basic communication.

Mark grew to hate that ugly ACAT computer. The computerized monotony that replaced his own voice seemed to stress every syllable in precisely the wrong place. Single sentences required a painful amount of time to generate; it was like asking a professional typist to use one finger to type a lengthy dictation. The ACAT device allowed for the bare minimum of communication, yet he could not express his deepest thoughts or carry out a meaningful conversation. Maybe that was for the better; he was too depressed these days to engage in life’s joviality anyway.

While he slept off the last remnants of the potent cocktail of pharmaceuticals delivered by the anesthesiologist, Mark recounted the last six months of his life in his dreams, or were they nightmares? Those were one and the same for Mark over the last six months since he went from a senior in high school taking college courses to being a prisoner inside his own mind. His once flourishing relationship with his parents was cut short into one word answers, not because of teenage angst, but due to the loss of his voice.

He loved his parents, but now found communication difficult, and the relationship soured, turning into a holding pattern of simple words surrounding the most basic of needs. His once rich late night conversations with his dad turned into simple “YES” and “NO” and “TIRED” and “HUNGRY”. He missed the times in the evening at the kitchen table talking about wild theories and future goals while he pursued an education in robotics. He missed the talks about how new breakthroughs in science could help in medicine (of chief interest to his father’s occupation), but also in industry and wage-labor. Mathematics, physics, computers: the things that seemed all too normal to Mark while his peers were busy trying their hand at teenage foolishness. Since the fated day he woke up in the hospital, however, he has felt a strain in their relationship. It seemed to come from both sides; Mark only communicated his most basic needs because of the labor now required to talk. But his father seemed to have acquired a chip on his shoulder as if somehow blaming himself for what had happened to his son. Of all the people he missed speaking with the most, his dad was the top of the list.

The impact on his mom was worse. She always wanted to improve the conversation, receive feedback at home on sweaters, dinner, or feelings, but Mark was more mundane in his daily conversation with her. Their transactions were generally centered around needs. Not that there was any strain before November, but this stay-at-home mother took her role of meeting everyone’s needs seriously. She was an expert at meal times, a fountain of wisdom for personal conflicts, and she would never cease to spin out blankets and scarves in her down times, each one personally crafted with love by the skillful twisting of her aluminum crochet hook. She always instigated excellent conversation, but her habit led only to sour rejection as her attempts to reach the fallen world in her son’s mind was shattered with the same simple words—“YES”, “NO”, “TIRED”, “HUNGRY”, “TV”, “READ”. Now her only connection to him was the pleasing one-liners that came out when she read him his books.

His communication with his sister also suffered. He generally got along with Kristy. She would watch him when he was a child when their parents were able to leave them home alone to steal a few hours by themselves. In recent years, she married a wonderful young man who befriended Mark. The couple lived just across town. Mark used to spend Saturday evening for dinner and a movie at their house. The best part about his times with Kristy and Sam were the conversations. In that environment, a teenage boy can talk to his young adult sister about the tales of life with the parents, but the ACAT stopped all communication. The other conflict was his wheelchair. The porch steps at Kristy’s house was as easy to navigate as a moat seeking to protect their house from his burden. Mark spent his last six months’ worth of Saturdays brooding over his losses instead of going to their house. Not that he wasn’t invited, but now he saw himself as an encumbrance to their time.

Mark’s life devolved into more routine than he ever wanted. Early in the morning, the clock radio gently announced morning by giving him his other pleasure in life: music. He was a prisoner in bed, only being entertained by the morning DJ. Eventually, someone came to get him out of bed and he was taken to the bathroom, served breakfast, and then parked in front of the television while his mom completed the morning chores. Only the most basic of words were uttered in the whole process, and only those that were necessary. His loss of speaking destroyed his family; all the important conversations were over, and Mark could not make up his mind about whether he was more depressed with the loss of the use of his body, or if he desperately missed the people he saw every day but could not address in a manner matching his intellect. He was trapped inside his mind with his dreams and nightmares.

In his present, oft-repeated nightmare, Mark was seated at his place around the dining room table trying to talk about his day. He relived his last day at school and tried to tell them all about it. He tried to talk about his plans for the weekend, and about his new projects. He opened his mouth to speak, but nothing came out. Flustered emotions overcame him as he shouted louder and louder in his head. His parents did not respond. He yelled and screamed, but no response. They were talking to each other, completely ignoring him.

“LISTEN TO ME!!!!” He shouted at the top of his lungs, but nothing. The words were trapped in his mind with no way of escaping; no way of getting the attention of the people he longed in his heart to talk to. He finally burst out crying, but again nothing. Suddenly he awoke in an instant, panted a few deep breaths, then dipped back to sleep one more time.